“My dream from the beginning was to premiere the movie here [SXSW]. It is just such a warm, film-loving crowd; ready to enjoy films, and have fun, and experience them and participate in them, and I am just so happy.” – Olivia Wilde

Olivia Wilde’s directorial debut Booksmart is an unfiltered comedy about high school friendships and the bonds we create that last a lifetime. Capturing the spirit of our times, the film is a coming of age story for a new generation.

During the Q&A at the SXSW Film World Premiere of Booksmart, Director of SXSW Film Janet Pierson asked if Wilde always wanted to be a director. “Absolutely, but it takes a lot of courage to do it and I had to spend a lot of time paying attention and observing. I started with music videos and shorts. I just had a dream of making a film like the ones that I loved and still love.”

“It was films like Breakfast Club, Dazed and Confused, Fast Times at Ridgemont High and Clueless, and I thought we need one of those for this generation. I want to add to that conversation.”

The last few minutes were devoted to audience questions and one person asked about Beanie Feldstein’s character Molly, who is the classic overachiever. “It was so fun to collaborate with Kaitlyn [Dever] and build that relationship because you get to see Molly behind closed doors and how silly, and fun, and loving she is. So much of the film is learning about the duality of people – how you can see something on the outside and they can be totally different on the inside,” said Feldstein.

Want more Booksmart? Be sure to take a look at Olivia Wilde’s Film Keynote, her profile in SXSWorld Magazine, and the Booksmart Women Featured Session! Catch Booksmart on Digital August 20.

The post World Premiere of Booksmart at SXSW 2019 [Video] appeared first on SXSW. 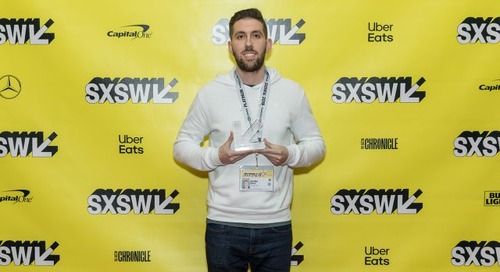 Each year, the David Carr Prize explores the literary themes of the intersection of technology, new media, ...

“Every job you have, no matter how insignificant it feels at the time is informing you later for a better [...