Tinker Hatfield on Design with Scott Dadich at SXSW 2019 [Video]

Tinker Hatfield is Nike’s VP of Creative Concepts, a legend among sneaker-heads, the subject of one of the most popular episodes of Netflix’s Abstract: The Art of Design, and one of the most famous shoe designers in the world. In this 2019 Featured Session, Hatfield breaks down the creative process, exploring how different disciplines of design influence, inform, and inspire each other along with Abstract co-creator Scott Dadich.

The pair started in the past, taking it back to when Hatfield was a track athlete at the University of Oregon. While studying architecture, Hatfield was also a shoe tester for Bill Bowerman, former coach and Nike co-founder. They moved into the start of his career at Nike as a corporate designer and how he stumbled into becoming a shoe designer through winning an internal shoe design contest. Through a self-described recklessness, Hatfield broke down the traditional design process that led to innovations like the Nike Air Trainers and the Air Jordan 3 through Air Jordan 15, as well as various notable collaborations with the likes of Michael Jordan, Back to the Future 2, and many more.

That recklessness applies in all aspects of his life Hatfield says – as evidenced from his boosted electric skateboard accident that resulted in a broken thumb that was wrapped in medical tape at the time of the recording. Hatfield attributes his many successes to the fact that he’s not afraid of failure – which he says happens more frequently than the successes – and that he is deliberately not a perfectionist.

“I have never been a perfectionist … I have 20 designs in the works right now, most designers at Nike usually have two or three. It’s probably because I’m so far from being a perfectionist. I just do it wrong. And I’m cool with that.”

Hatfield thrilled the audience by taking off his shoes (a pair of limited edition Jordan 3s that he designed in a collaboration with Justin Timberlake) and giving them away to an audience member. He also teased a new pair of unreleased shoes from Nike. When pressed for details, Hatfield simply said that they “weren’t for running.”

Watch the entire Featured Session as well as more videos from the 2019 SXSW Conference — including sessions, Featured Speakers, and Keynotes — on our YouTube channel.

The post Tinker Hatfield on Design with Scott Dadich at SXSW 2019 [Video] appeared first on SXSW. 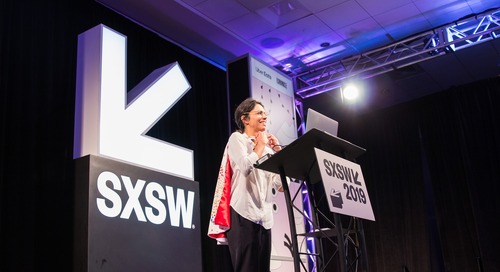 This week, the prospects for Woodstock 50 got muddier, Spotify marked a milestone, and we fell down a rabbi...