“I can now call myself a SXSW Filmmaker, and that is a huge honor.“

Olivia Wilde is a modern-day Renaissance woman with a resume ranging from director and actress to producer and activist. The day after the World Premiere of her incredibly successful directorial debut, Booksmart, Wilde delivered a 2019 SXSW Film Keynote. Her speech touched upon her early career, finding a creative partner, and the importance of giving people chances.

“I realized if I wanted things to change, if I wanted to make my voice heard, I was going to have to shift the paradigm from within and that is really hard. Especially because I have been working in this industry since I was eighteen…for seventeen years, almost two decades, which is truly insane. I got to celebrate my 35th birthday, here, last night at my premiere, and it was truly the most special day of my life.”

Wilde also recounted another powerful moment in her life at SXSW 2013 with the World Premiere of Joe Swanberg‘s Drinking Buddies. “I was a producer on the film and I felt our tiny team had truly crafted something unique together. I’m grateful for that movie because it shoved me into the realization that my instincts were actually worth listening to,” said Wilde.

To learn even more about Wilde, check out our profile on her in SXSWorld Magazine and our Booksmart Women Panel! Watch the trailer for Booksmart and be sure to check it out in theaters May 24!

The post Olivia Wilde Discusses the Powerful Moments in Her Life That Lead to Her Directorial Debut Booksmart [Video] appeared first on SXSW. In this Featured Session, New York Times best-selling author of Steal Like an Artist and Show Your Work Aus... 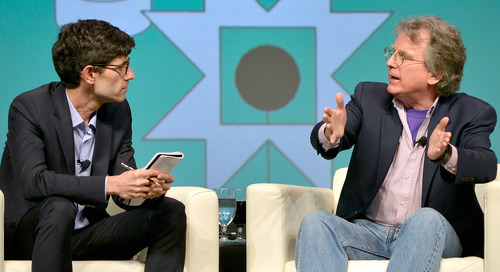 Roger McNamee on Facebook and How We’re All Zucked [Video]

As a Silicon Valley investor of 35 years and an early mentor to Mark Zuckerberg – Interactive Keynote Roger...