Nonny de la Peña, CEO of Emblematic Group and a pioneer in the world of virtual and augmented reality, highlights the expansive opportunities of these technologies beyond entertainment during her Convergence Keynote, “Reaching for Truth: Unlocking the Power of Human Creativity for Storytelling in Virtual and Augmented Reality,” at the 2018 SXSW Conference.

De la Peña has made an effort to fight for social justice by immersing spectators into environments they never would have been able to experience otherwise, allowing people to empathize and understand through the lens she has created with VR/AR.

During this eye-opening keynote, she expresses why exposure to new situations will create perspective. While telling her story of rising to tech-notoriety as a woman, de la Peña presents examples of what makes her work special. Throughout these virtual and augmented reality situations, she urges the seeking of new mindsets and makes a point to ask the audience “to go back out there in the world today and think about treating each other more kindly. We’ve got to make a shift.” De la Peña emphasizes the use of meaningful stories to approach open-mindedness.

“We need humanities, we need to be able to tell that story, that’s what humanities does, so we can’t separate the two things anymore, very clearly. We need VR, we need story tellers, we need ways to begin to convey that information.”

Emblematic Group creates immersive virtual reality experiences that range from flying under a helicopter and witnessing the effects of climate change to seeing what it’s like to live in solitary confinement. Their work gives perspective – and it is proven to do so. When doing research with USC, de la Peña describes that people felt more empathetic and ready to change their political leanings after experiencing different virtual and augmented reality situations. De la Peña aims to create experiences that are meaningful, and not just for entertainment.

De la Peña also discusses Emblematic Group’s new REACH web platform, which allows people to tell their own story in room-scale virtual reality. REACH is a breakthrough for person-to-person communication, which encapsulates all of the values the team is aiming to express. Nonny de la Peña was named one of CNET’s 20 Most Influential Latinos In Tech, Wired Magazine’s #MakeTechHuman Agent of Change, and has been called the “Godmother of VR” by Forbes, Engadget, and The Guardian.

During the 2018 SXSW Convergence Keynote, many of de la Peña’s pieces were shown to the SXSW crowd to exhibit the technology of 5G, Edge Computing, and immersive VR technology. Watch here to see how Nonny de la Peña uses these technological advances to tell stories that change perspective.

“You don’t experience your world as flat, you experience it with volume.”

Get inspired by a multitude of diverse visionaries at SXSW – browse more 2018 Keynotes, Featured Sessions, Red Carpets, and Q&A’s on our YouTube Channel. Follow us on Facebook, Twitter, Instagram, and SXSW News for the latest SXSW coverage, recaps, late-breaking announcements, and updates. 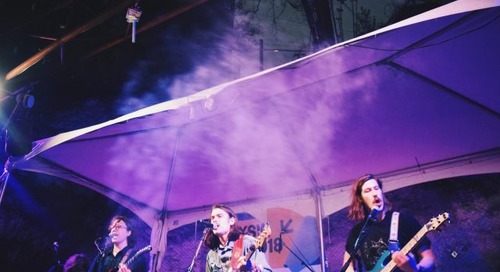