Instagram Founders Kevin Systrom and Mike Krieger sat down with TechCrunch Editor-At-Large Josh Constine in their first onstage appearance since leaving Instagram for an Interactive Keynote at SXSW 2019.

Over the course of the Keynote, the three discussed Systrom and Krieger’s entrepreneurial journeys, how they grew Instagram to over one billion users, the new influencer economy, the importance of establishing safe communities on social networks, their approach to digital well-being, what comes next for them, and what they hope to leave as their legacies.

When speaking on the motivation behind the creation of Instagram, Systrom started elaborating on how different platforms allow for varying sides of an individual’s personality and expressions to come through.

“Different social networks allow you to be a different person and express that different facet of your personality. You on Twitter is probably very different than you on Snapchat, than Instagram, than Facebook, and that’s part of the beauty of having all these different choices.” – Kevin Systrom

Later in the session, Constine described the infamous creator economy that has risen on Instagram as a way that “even normal people get paid to mention products.” In response to inquiries about their reactions to the rise of the influencer economy and Instagram’s contribution to the new career path, Krieger acknowledged that it is a subset of Instagram that they were unsure how to regulate.

“The economy of social networks is around social status and influence. If you think about that as just a phrase, influencers are kind of the ultimate manifestation of that. [Whether] they have built status or built status in order to monetize it – you can’t fault them for it.” –Mike Krieger

Watch the entire Keynote as well as more SXSW 2019 videos from Conference, Featured Speakers, and Keynotes on our YouTube channel. 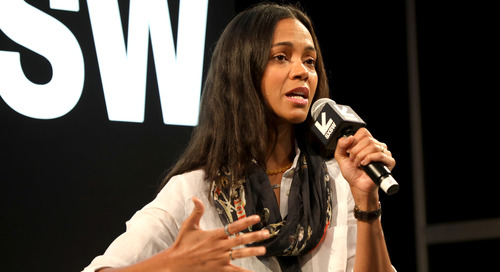 Changing the Narrative with Zoe Saldana at SXSW 2019 [Video]