Our next Filmmaker In Focus features two accomplished Texas filmmakers Sandra Adair and Karen Skloss. The Secret Life of Lance Letscher marks Adair’s directorial debut. She is an Academy Award nominee for her work on Richard Linklater’s SXSW alum film Boyhood after editing 18 of Linklater’s films over 22 years to great acclaim. Writer/director/editor Karen Skloss is also an award-winning filmmaker with work shown on HBO, in MOMA, in wide theatrical release and in film festivals internationally. Her feature doc Sunshine premiered at SXSW in 2009. The Honor Farm is her first narrative feature as director. Learn more about these exciting projects below:

The Secret Life of Lance Letscher

A:“The Secret Life of Lance Letscher is a deeply intimate and psychological portrait of internationally known, and Austin based, collage artist Lance Letscher. As we journey inside the studio and inside the mind of Lance Letscher, the artist’s inner life is revealed. Told through memories of trauma and triumph, the film provides intimate access to Letscher’s profound insights on creativity, the subconscious, work ethic and spirituality. Through his intricate artistic process, we witness Letscher’s unwavering determination to stay in the moment—free of mind, thought and preconception. Featuring detailed images of more than 100 of Letscher’s collages, sculptures, and installations, viewers are given poignant insights into Letscher’s methodical techniques and come to know this profoundly interesting and insightful artist.”

A: “Initially, I was motivated to follow Lance as he took on a new medium, metal, for a commissioned piece to hang in Austin’s South Congress district. Lance is known for his intricate and beautiful paper collages and I wanted to document this transition. But, as I came to know Lance, an intense and thoughtful man, he revealed his profoundly moving personal story with a poetic ability to articulate his ideas about creativity and the subconscious. I was struck most of all by his evolution as an artist and how his tumultuous life was reflected in the work.”

A: “I’ve always been interested in art, attending art school in college until I dropped out to become an assistant editor. I have 2 grown kids and a sweet grandson who I am intent on teaching to appreciate art and creativity. I’ve cut 20 films for Richard Linklater and this is the first film I’ve directed.” 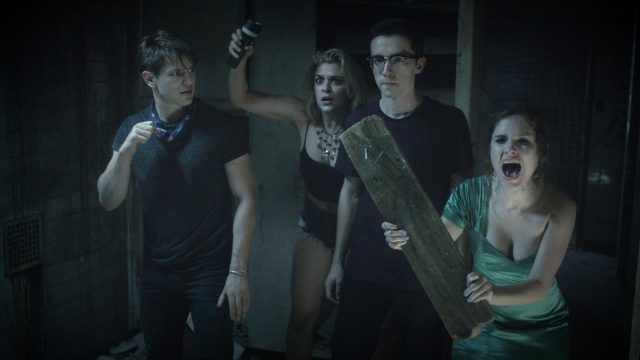 A:“When Lucy’s prom night falls apart, she finds herself jumping into a hearse headed for a psychedelic party in the woods. Looking for a thrill, the party wanders deeper into the forest, to a haunted prison work farm. A secret wish and a summoning of the dead sends the group on a mind-bending trip that may be a dangerous trap.”

A: “When I was a teenager, a handful of powerful experiences really set the stage for the rest of my life and who I would become. I wanted to make a film that captured a bit of that magic – so I set out to make this freaky art thriller for young adults and the young at heart.”

A:“I’m a drummer and play with the band Moving Panoramas. I used to teach preschoolers how to swim.”

The Daily Chord shares a handful of stories about music and the music business each weekday. These stories ...

The Daily Chord often links to profiles of notable artists and executives among stories about the business ...